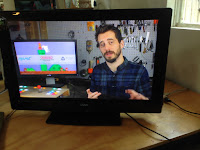 Another project taken care of this weekend. I found a Vizio VP322 HDTV10A plasma TV last year that looked too new to be broken. So, I took it home and found that it was broken. It would remain powered on for a few seconds and then it would shut down. A check on the internet found that this model was built with capacitors that frequently failed. After opening it up I found that, sure enough, there were two "jiffy pop" capacitors. I bought replacements from Mouser and today installed them. The TV now works. Total repair cost was around $10.

I will keep it powered on for a few more hours to see if anything else breaks. Until then, I have plugged in a Chromecast and have DIY videos running in the background.

The hardest part of fixing the TV was not the soldering, but forgetting where the speakers' ground wires were connected and which screws were for which holes. I clearly made good guesses, but I do have several screws left!

The capacitors that Vizio had been using may have come from the manufacturer that had been making knock-offs from design documents stolen from a competitor. The problem, as I understand it, was that the documents were incomplete and so the materials created for the knock-offs was wrong and of a poor quality. When you open the back of any TV you will find many dozens of capacitors and, together, this adds a substantial cost to the manufacturing. So, that cheap TV from Walmart is cheap because it is made of marginal quality parts. But you already knew that.
Posted: May 30, 2015