Why is Spring taking a perfectly good Set value and passing along a null?

Why is Spring taking a perfectly good Set value and passing along a null to the property's setter? That is, I had a simple bean declared like the following


Where the property's setter is declared


But every time setY() was called the key z's value was null. The problem's answer was very hard to track down. It comes from how Spring automatically converts objects to type specific property values. Spring has two ways of converting a value for use in a property's setter method. The first is based on converting a textual representation to an object via the java.beans.PropertyEditorSupport API. The second is based on Spring's own org.springframework.core.convert.converter.Converter API. I has used a Converter in an unrelated part of my application's Spring context. This was my application's first use of the Converter API. Turning the Converter API on, however, brought with it other conversions I was not expecting. The most detrimental was the Collection to Object converter. When Spring sees that the property expects an Object it tries to convert any value to an Object. (Even though every value is an object.) The Collection to Object converter converts an empty collection to null. Let me say that again .. with emphasis. The Collection to Object converter converts an empty collection to null. My set was empty. And so, a perfectly good empty set value was converted to a null. The correction is the change the setter for property y to

And all works now. p.s. I would never have been able to debug this without Spring having open source. Thanks VWware, Spring Source, and all the contributors.
Posted: March 27, 2012

The calendar displays that we have had forever just don't help me anymore. Too much information and/or too much interaction need. I want my calendars to show me what I want without interaction. I want to distinguish what is common and what is unique. Common, for example, are events such as every workday at 9 AM I have a standup meeting; Thursdays I deploy new releases; Every second Monday of the month during a school year I have a PTA meeting. Unique ones are the dentist appointment and the odd professional event at night. I don't really want one-view calendar anymore. I need multiple-view calendar like he one illustrated here. 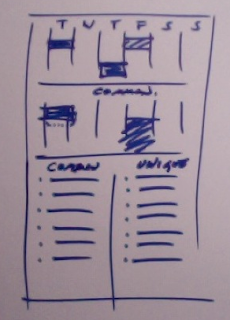 Since we have separated events that actually occupy the same timeline we need to rejoin them somehow. My initial thought was to add a ghost to each chart that signifies the presents of an event in another chart, but I am not wedded to this.

Does anyone make a calendar like this, either visually or purposefully?