Letter to the Editor: The current pilot project does not address the 1:1 issues

This week's South County Independent newspaper has an article on the school district's 1:1 initiative. Unfortunately, there is a gross misrepresentation of my thinking on the matter and one statement that is attributed to me might get me lynched by the teachers! Here is my response.

Letter to the Editor:

We should expect our high school students to have the means of engaging with their work, their peers, their teachers, and their administration at all times. It is significant that the school district is moving forward to supporting this. Where I am at odds with the school district is with the pilot's actual focus, the speed and approach of the process, and its entanglement with PARCC testing.

Let us first make clear what "one-to-one" (1:1) means. It is one device per student that is available all day and every day inside and outside of school. Preparing our students for college or career is to prepare them for continuous engagement and interaction. Working as needed, when needed, with current and relevant materials, with the appropriate people, and all without regard to location or time zone.

The current pilot project does not address the 1:1 issues. What the pilot does is to repeat the work done by hundreds of other school districts across the country and that is to provide laptops to teachers for student use for specific classroom instruction. In short, the laptops are lab equipment. $98,000 of lab equipment and one instructor (FTE).

The school district is heading quickly down the wrong road. The only public meeting on this was in November 2013 when BYOD ("bring your own device") plan was, rightly, abandoned and 1:1 became the new plan. Four months later the "devices", "professional development", and "finance" committees were created to plan the work. The teachers and students have yet to be involved in the planning and yet we expect everything needing to change to be ready by August 2014.

We don't need to rush. I suggest that there first needs to be a plan as to how the freshmen teachers (as a whole) will use 1:1. Let us use the 2014 summer and the 2014 fall to figure this out. Use a portion of the pilot's allocated money to contract for the help and buy some equipment and services to learn with. And please let us have the students engaged in this work too. Only then let us work out the specific devices, professional development, and finances needed in the 2014 winter and 2015 spring. Have everything in place for the 2015 fall.

James Burke's TV series Connections made a significant impression on me when I was a teenager and has continued into my adulthood. My worldview of our past, present, and future situations is premised on it being brought about by a very long line of related and, and this is really important, seemingly unrelated changes. This is obvious to historians but not so to a 15 year old and, unfortunately, not so for far too many of my contemporaries -- especially here in the USA. This week I was happy to come across a recent interview with Burke at You are not so smart podcast. In the interview Burke discusses his current project of envisioning the transition of a world designed to mitigate scarcity to one of controlling abundance. Well worth a listen.

What if by the fall of 2015 the high school had a high bandwidth & low latency cell data service?

What if by the fall of 2015 South Kingstown, RI and the high school (in particular) had a high bandwidth & low latency cell data service? No matter where a student was in town he or she would have access to the school's and the world's resources? If this were so, would we want to invest in a campus wide wifi? Or would we instead provide 1:1 devices with a cellular modem and pay a monthly service fee to a carrier?

PARCC and the image of the assembly line worker.

When I see this image I think "assembly line worker." And I then wonder and worry about how much PARCC really understands "readiness for college and careers"?

Asked to continue to be involved with 1:1

I have been asked to continue to be involved with the South Kingstown School District's one-to-one initiative (1:1). I am not sure how to do that now. I kind of burned all my bridges on the way out. And I continue to believe we are also going about it in a rush and so the whole endeavor needs to be replanned.

I really think that there first needs to be a plan as to how the freshmen teachers will use 1:1. Let's take the 2014 summer and the 2014 fall to figure this out. Use a portion of the allocated money to contract for help and buy some equipment and services to learn with. And have the students engaged in this work too. Only then work out the specific devices and finances needed in the 2014 winter and 2015 spring. Have everything in place for the 2015 fall.

With regard to PARCC testing needs, buy as many cheap Chromebooks as needed and consider it a sunk cost. See New Device Costs per Year.

I see no need to rush 1:1 and no need to tie it to PARCC testing today.

Prime with white and wash with black

I was watching 12 Different Ways to Prime Your Wargaming Miniatures for inspiration -- aka the continuation of my procrastination and my life generally getting in the way of my hobby -- and so tried a few of the painter's suggestions. The one I really liked was to prime with white and then wash with black. 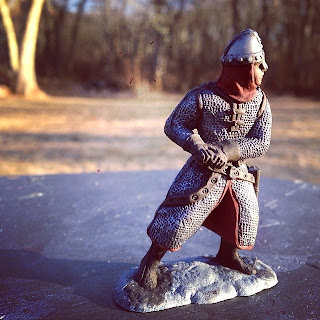 I only washed where there was a transition and the larger areas that were intended to be dark. I also washed with acrylic and not oil paint. I think it worked well. And WAY better than Army Painter's expensive "dip".

If you find the knight's sword send me a note.

Testing for the presence of a value


The code is testing if the foo object has a bar value. This usage seems innocuous, but it is not. It both hinders readability and refactoring. Let's address readability first.
The test is asking that the user of the class infer the presence of a value. However, it does not test for a value, but, instead, for the absence of a value, the none value. For readability, don't make the user guess what is happening but, instead, make what is happening explicit. Now, on to refactoring.

The none value test actually exposes an internal implementation of the class to the user of the class. What if a refactoring requires that the internal implementation of the none value change? A common change, for example, is for a null to be replaced with a sentinel value [1]. Should this happen then all uses of the class will have to be changed because the none value test is ineffective. Moreover, the ineffective test will not break the running code, but instead send execution down the then conditional path. Let's hope that no life or treasure is affected.

To improved readability and facilitate refactoring simply include an explicit test for bar.

The purpose of the test is clear and use does not expose an internal value.
[1] http://en.wikipedia.org/wiki/Sentinel_value

Well, I resigned from the South Kingstown school district's Technology Professional Development and Curriculum subcommittee after only two meetings. I am unsure if this was a good idea, but I am sure that I do not want to be associated with the subcommittee's outcome. The work ahead is little more than a backfilling of work that should have been completed before the one-to-one (device per high school student) pilot project was scheduled.

The pilot, as presented so far, and as I surmise from the already decided upon pilot factors -- the device choice, specialized staff, budgeting, and the need to finance PARCC testing -- does not prepare the SK school district for one-to-one in the 2015/2016 school year.

The pilot does not address any significant issues raised by one-to-one. The pilot will put laptops in the classroom on carts -- colloquially known as COWs, computers on wheels. Existing models and ramifications of doing this are readily available and well understood. There is 20 years of documented and reviewed research and practice. (I did this kind of work in the mid 1980s.) If you want something more contemporary then travel just up route 138 to the Green School and ask about their experiences.

Computers in the classroom does not differ from bunsen burners in the classroom. That is, they are both lab equipment that will be used to support subject specific lessons. One-to-one is about augmenting one's thinking and communication and has almost nothing to do with the tool itself. That is, while I might advocate for tablets and someone else for laptops, in the end either device will serve the same end. (I would like to address costs but that would take away from my focus of this email.) Has your intellectual life been vitally affected by a bunsen burner?

Here is a thought experiment. Some years ago you worked exclusively with a desktop computer. Today you work exclusively with a laptop. Some years ago content access was limited to in-house only. Today, not only is that not the case, but there is the expectation of equal access from anywhere. With these changes, how has your work life changed? Can you imagine working as you once did -- at a specific desktop and only when in the office?

For students learning is their work. They must have the same experience as you do today with your ever present device and the access to software tools and content it affords. That is one-to-one. That is what SK school district needs to pilot.