Fuck you Wizards of the Coast! Let me play Magic!

I want to practice Magic the Gathering and so using one of Wizards of the Coast's applications seems like a good way to proceed. Now remember that Magic is a card game, let me spell that out C A R D G A M E, and so one would presume that the software is not too hard to write and it would have minimal requirements of the host machine. "No fucking way," says Wizards of the Coast (aka Hasbro) 'cause we are all about you buying more stuff. So, to be clear, ...

"No, you can't use that 2012 Windows 7 machine because you don't have enough graphics RAM."

"No, you can't use that same 2014 MacBook Pro with a Windows virtual machine either you looser."

Dear Wizards of the Coast, I want to play your game. I want to buy your cards. I will even buy your card sleeves. And buy them all again every 3 months. But I am not buying another computer to play a fucking card game!
Posted: March 30, 2016

The Internet is composed of unspoken inner thoughts

When will people figure out that the Internet is composed mostly of the unspoken inner thoughts of the ignorant, confused, bigoted, depressed, bored troublemakers? Evidence? See Boaty McBoatface and Tay.
Posted: March 24, 2016

This weekend's workbench was moving the workbench. Well, what I was using was not a workbench but the end of a large table that is also used for gaming, the kids homework, boardgames, and other activities that need to spread out. I had intended to move to a small table that I bought at Ikea a few months ago, but decided it would require that I add a back and sides and shelves and ... well it was beginning to become a bureau. I not did want to put that much time into that kind of project right now.

Next to my computer desk is a second computer desk. This had an old Mac Mini that the kids used to play on and do some homework with. Since they got Chromebooks, however, they really have not touched it. Its last use was for Minecraft, but even that obsession has past. So, I decided to repurpose the desk for modeling.

I packed up all the computer equipment, including two ancient x86 towers, added overhead lighting, and moved over the modeling stuff. I am glad I made this choice. The table is 6' x 2.5'ish so there is plenty of width and just enough depth. I have a couple of Ikea flat files for holding my unpainted figure, modeling bits, and infrequently used tools so I have a good amount of storage. I will likely build something akin to Linn/Darbin Orvar's small parts organizer caddy in the coming months.

So, back to painting those 6mm Vikings and Anglo-Saxons. Which, I have to admit, I might never finish. They are just not that much fun to paint. At this point I am thinking that for 6mm figures I will send them out to be painted. At 30¢ to 80¢ per figure a few hundred would be $100 to $200. Well worth the cost.
Posted: March 20, 2016

A reminder that Staples prints large format (eg 36"×48"), black and white, engineering drawings at a very reasonable cost. They is currently having a sale on printing 24"×36" engineering drawings for $3.59. So, the next time you want a map of your dungeon crawl, space combat, 40K coloring poster, or you have the need to Feel the Bern (source) get it printed at Staples Copy & Print.
Posted: March 10, 2016 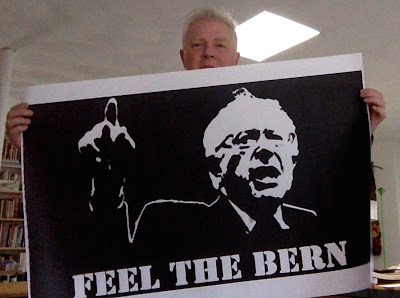 I am going to say it. I hate the giant spaulders, that bulbous shoulder armor, that so many 40K and Warmachine figures & factions have. I like my fantasy armies to have some grounding in practicality. How can the fighter use peripheral vision to see anything to his or her left and right? Will fantasy combat newsreel footage look like a mostly disorganized and violent tennis match audience? Heads wildly swinging from left to right and back again as they attempt to keep aware of the battlefield! Or perhaps spaulders are just the result of retinitis pigmentosa becoming rampant along with other degenerative, inheritable DNA mutations -- like shoulders wide enough to hold up the damned things. I should pity them.

Ok, back to your normal work.

(And yes, I am well aware that the Cryx Bane Thralls I bought have them. And yes, I feel the hypocrisy.)

Slack, "Jump to conversation", and a global shortcut

Slack's "Jump to conversation" Cmd-K shortcut is really useful to quickly contact one of our burgeoning staff or channels. Unfortunately, Cmd-K only works when Slack is the front-most application. Further, since Slack does not provide a "Jump to conversation" menu item you can't use the Keyboard System Preferences to make a global shortcut. So I wrote a small Service, SlackCommandK.workflow [1], that when run sends a Command-K to Slack. I then assigned it the Ctr-Cmd-K global shortcut. (I need to add Ctr as Cmd-K is used in other applications and their use of Cmd-K trumps the global use.)

To use the service download it, unzip it, launch it, give permission [2], install it, and then go to the Keyboard System Preferences to add the Ctr-Cmd-K shortcut.

[2] Since this Service is not signed you will also need to override the default restriction on unsigned applications using the Security & Privacy System Preference. Go to its General tab and press Open Anyway button next to the text


"SlackCommandK.workflow" was blocked from opening because it is not from an identified developer."

I needed a quick and dirty worker pool within bash. Easy parallelization with Bash in Linux worked well. In short,

Where did that data come from?

I have several reporting scripts that send me email overnight. When receiving such an email it is useful to know its origins. Using something like Rundesk that centralizes a catalog of scripts to be run on machines would be best, but I am not yet prepared to install and support this tool. And so, for now, I am just adding a line at the end of each message with its origin using the command

which, for the hypothetical script at $HOME/bin/reports/tellme.sh on host42, outputs