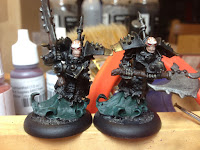 I finished priming and painting the faces and arms of the 6mm Vikings and Anglo-Saxons. I like priming with black gesso as it is very matte and masks no detail, but I never seem put enough on to account for its extreme shrinkage during drying. So lots of spot touch ups were needed.

I bought a painted band of 12 Warmachine Cryx Bane Thralls at CaptainCon a few weeks back. The band consists of a leader, a banner holder, and 10 soldiers. This was an impulse purchase, something I don't normally do, and while I do intend to sell them I decided to find a use for them until then. So I am making a Saga warband and battleboard. The band was 2 thralls short to make 3 hearthguard units so bought 2 from GAV Games and painted them up this weekend. Now I need to think about the battleboard ... perhaps there is something on the Revenant battleboard that I can use.