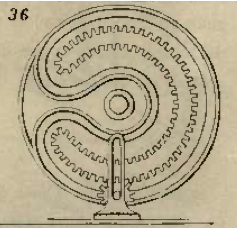 "36. Mangle-wheel and pinion -- so called from their application to mangles -- converts continous rotary motion of pinion into reciprocating rotary motion of wheel." Found in Five hundred and seven mechanical movements. I wonder what proportion of technical people in the past were expected to know this stuff cold compared with those today? Then again, they didn't know about mathematical programming either.
Posted: November 19, 2009

A Congressman was seated next to a little girl on the airplane...

A Congressman was seated next to a little girl on the airplane. He turned to her and said, 'Let's talk. I've heard that flights go quicker if you strike up a conversation with a fellow passenger.'

The little girl, who had just opened her book, closed it slowly and said to the total stranger, 'What would you like to talk about?'

'Oh, I don't know,' said the congressman. 'How about global warming or universal health care?' and he smiles smugly.

'OK,' she said. 'Those could be interesting topics. But let me ask you a question first. A horse, a cow, and a deer all eat the same stuff - grass. Yet a deer excretes little pellets, while a cow turns out a flat patty, and a horse produces clumps of dried grass. Why do you suppose that is?'

The California legislator, visibly surprised by the little girl's intelligence, thinks about it for a minute and says, 'Hmmm, I have no idea.'

To which the little girl replies, 'Do you really feel qualified to discuss global warming or universal health care when you don't know shit?'
Posted: November 19, 2009

A friend tweeted some time ago about being able to open any Macintosh's application's minimized main window using a consistent command key. Since I started using Witch I have been able to do this. Since Cmd-Tab is grabbed by Apple, I assigned Cmd-1 to invoke Witch. I have configured Witch to place its cursor in the list of application windows on the current application's first window -- which has always been, in my experience, the main window. The result of this is that I type Cmd-Tab and then Cmd-1 I effectually am able to bring the application to the foreground and have it's main window presented foremost even if it is minimized.

Note that I could just use Witch with Cmd-Tab but I find that my mind-fingers connection for "move to another application" to be too tightly bound to Cmd-Tab. Anyone know of a patch that will allow me to bind Witch to Cmd-Tab for OS X 10.6?
Posted: November 18, 2009

I get too many emails from advocacy organizations attempting to keep me aware of them and their work. They need to find a way to to do this without sending me pretty but functionally unhelpful email or expecting me to watch a video to get more detail. Repower America is especially bad. An itemized list of short statements of accomplishments and/or actions with links is all I need.

A few days with Spring.

I have been learning Spring 2.5 for the last few days. My usual method of learning a new tool is to
Now, I understand that beauty is in the eye of the beholder and so my examples probably suck to others. However, my track record is that they suck less.

Spring is funky. I had wanted to use EJB3 for this project but Spring won out. The reasons have little to do with technical merit. From a larger software engineering perspective EJB3 is just too unknown among the in-flight-magazine readers. Ok, that was a dig and childish. Sorry.

For Spring to work on this project I need for it to handle REST, JMS, and RMI simply and elegantly. To this end I have been working on JMS and RMI stuff mostly.

Spring's "JMS template" stuff is very old-school Java. A better approach is to use generics for clean coding and have the configuration done in XML. After some effort I can now code a JMS listener as simply as

And, if your message is more complex the listener's complexity does not change. The generic MessageListener